Let us help you today 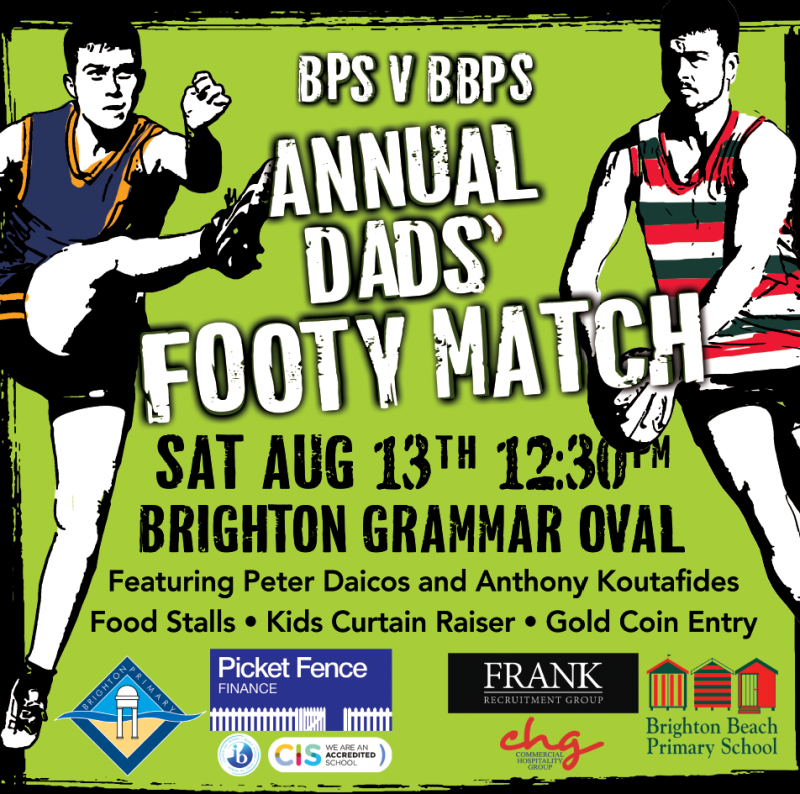 Brighton Primary School is once again competing against Brighton Beach Primary School on Saturday 13 August 2016 in the Annual Dads’ Footy Match. To be graciously hosted at the ideally placed Brighton Grammar School.

Picket Fence Finance is proud to sponsor the event. We are very excited and invite you to join us!

Keep up to date via our Facebook page at: https://www.facebook.com/picketfencefinance/
This event is designed to not only help the Dads stay fit & active and be good role models for our kids, but also to form a closer bond between the parents (especially anyone new to each school) and help raise important funds for both schools.

In keeping with the family theme, the curtain raiser will kick off at around 12.30pm with two local U-9 teams playing, and they’ll be keen to show off their skills to the growing crowd – who will no doubt be there early to enjoy the BBQ, Canteen, Coffee Van, Face Painting or simply to gain the best vantage spots.

After all those 4pm Sunday training sessions, the big game is getting close…and we’re very excited to announce that, with the help of one of the BBPS Dads (thanks John Rombotis) two former AFL legends – Peter Daicos (a member of Collingwood’s 1990 Premiership & 250 game superstar) & Anthony Koutoufides (a member of Carlton’s 1995 Premiership team & 278 game superstar) will play a quarter of a game on each team.

It has been a hotly contested match in recent years, with Brighton Beach victorious for a number of years, but the Brighton Lions securing last year’s title, but with the 2 AFL legends playing this year, just playing in the same game as them may be enough for some of the Dads. Imagine setting up one of these legends with a pin point pass for a goal…enough to dine out on for many years!!!

The legends will then auction off their game day jumpers (No’s 35 & 43) at the end of the match, so get ready to bid on them.

Looking forward to seeing everyone at the big game.